At the weekend and just in time I heard of Stitch Camp with Gwen Hadley and TextileArtist.org. I found the Facebook group, and was inspired. It started on Monday of this week. If you are quick you should still be able to access this free Stitch Camp.

First task was to choose fabrics, threads and mark making equipment. I was governed by the acrylic paints I have , and plumped for blue and silver.

Next task , get going and have some fun.

The silver looks like grey on fabric which was a disappointment and my idea to roll a marble bottom right was wrecked when I dropped it and it didn’t roll. This piece was supposed to be heavily marked. It is.

Second piece is to be marked much less. By now I had abandoned my mark making objects in favour of a thin paint brush and swirls.

Give me scrap fabric and I will enjoy myself no end.

That was day one. Day two is cut your fabric into squares, choose one from the first piece and one from the second, one of one colour one of the other find two squares where the marks flow into each other and tack together.

Mine had of course stuck to the newspaper I had covered the table with. I just yanked them off. Facebook assured me I wasn’t the only one, who’d done this. The less gung-ho amongst the group got in a right old tizzwaz, and no end of precise instructions were suggested.

Now people got in a muddle here. We’d been told we would need a prodigious amount of fabric, but the accompanying video only showed a much smaller piece. I had opted to use similar sized pieces of fabric to the video. Bear in mind this was supposed to take about half an hour a day. More Facebook fretting eventually prompted Admin to step in and explain we only need to have four squares to work on!

Fortunately I had decided at this point that a big long line was a daft idea, and had opted for three rows if four squares. A sensible person would have accessed her rotary cutter and mat, but I was enjoying myself far too much to be a..sed.

Day three using threads to make marks and blur the boundaries so that paint marks merge. Day four is add applique to do more of the blurring.

I had used a scrap of white cotton fabric which felt quite flimsy. I found some curtain lining fabric to back it with. I have started stitching, and I have to say it’s quite relaxing, but you can’t do that much in the half hour you are supposed to need.

Tomorrow is day five when we will be shown what we can do with our fabric. So far I am just enjoying playing. I may well repeat the exercise with some nicer fabric scraps, and more swirls, because it is pretty darned fun!

Love to know what you last did that was just fun.

I can’t quite believe that I have now made all the tags for this challenge. I have loved this project so much, even the tags I didn’t care for over much, which includes two of the ones I am sharing today.

This tag was about something that triggered a memory. Anne used a feather as they represent her Mum who died a long time ago. Others used found objects eg pebbles, or sea glass from a holiday they enjoyed. I used this lovely butterfly button to represent the two butterflies which appeared at strange but rather important times this year for me.

We were supposed to add round buttons, but I didn’t. I used these instead.

I loved , just loved stitching this wreath, back stitch, fly stitch, chain stitch, bullion knots( and they are indeed much easier with a milleners needle) , french knots and beads, lots of them. I can see myself making more of this one for Christmas cards.

This was tied using macrame, it was fiddly and I don’t like it over much, but it was quick.

What a wonderful project and full credit to Anne Brooke, who inspired every one of them with her amazing videos. She is doing flags next year, but there is a charge I think. Can’t blame her it must have been a lot of effort. Hope you enjoyed reading about my efforts.

Not sure what I will stitch in 2022, we shall see. I suppose I could always sticth a few of my projects locked away in cupboards for what, a rainy day?

The weeks just slip by, something I realise as the tags go by. Here are my latest ones.

I had to improvise with this one. We were supposed to make three tags , Big one on the bottom, smallest on top. Only I didn’t have tags that would fit, hence the need to improvise. Above is my top layer, under this…

Because apart from anything else my ring of tags is getting very bulky.

If you go back to the First picture, hopefully you see the moon peaking out of the side. Next up

I didn’t like this one at all. Over fiddly. I wish I’d put them further up the fabric rather than as instructed down the bottom. The gold seemed like a good idea but was ultra hard to use. However I did get to use some of the leftover fabric from the Stitchbook project.

Disappointed with this one, too much toning? Sad thing is I love this fabric… Flower fairies, leftover from a dress for Little Miss F back in the day.

I liked doing this one, and it turned out better than expected. The background fabric was dyed by yours truly over twenty years ago and is nearly all gone. Oh dear.

I really enjoy these tags. A little bit of creativity each week, small enough to be doable in spite of everything life has thrown at me, and I have written something on the back of each one dedicated to people, or an event, or something I was grateful for as I stitched.

Right on with the next one, which is going to require some more improvisation.

Time to catch up on my progress with the #52hannemade tags challenge.Sorry rather a lot this time, and I think there is one missing. I will include it the next time.

Each one is made of three fabric layers attached to one side only. Interesting to construct.

The idea was to appliqué a mug, but I have been wanting to use this piece of fabric left over from the First, nay only quilt I have made to date, so I did. I call it faux appliqué.

Soothing slow stitching, loved this one.

I enjoyed this one a lot.

We had a five layers of fabric each shape cut to a different layer. I found this hard and a bit frustrating, especially as my final layer frayed when I got to it and I had to put a patch under it!

The idea was to use the shapes we cut out last week and appliqué them in the same design. Mine hadn’t survived the ordeal of reverse appliqué sufficiently well, so I cut fresh pieces!

I added French knots too, it seemed to need them.

This challenge has been just right for me this month, doable creativity.

I enjoyed this tag, all about the stitch. The top one was a woven one, sadly I spotted a mistake, but never mine. I prefer the bottom one which is wrapped.

The idea if this tag was to create texture using the threads leftover in a needle and saved. I thought it looked messy on the video and could see bits falling off, so I trapped my threads under a piece of net. It lacks the texture so I added french knots. Quite like the result.

These tags are created following videos made by Anne Brookes. They are on you tube, #52hannemadetags, and on Instagram and Facebook.

Time is really flying at the moment. Here are the next four tags. Tag 24 was to create a bouquet of flowers tied with ribbon or in a vase. I opted for the ribbon since I just happened to have one in need of a job.

A really enjoyable tag with lots of stitching.

And there we were at the half way mark for which we all deserved a medal.

I am really enjoying making these tags.

I am falling behind with sharing my tags. The First one introduces writing using back stitch. The suggestion was to choose a quotation, put the First word on top, turn up the fabric to reveal the rest of the quotation. A super idea but I couldn’t think of a quote and my thoughts were full of Mum whose birthday it was that week. By a long train of thought I came up with the idea of incorporating her childhood address and away I went.

Turn up the fabric to reveal this on the other side.

Next tag was a simple combination stitch.

The next one is bullion knot and a chance to get the pretties out. It was suggested that we used a variegated thread. Since I don’t possess many such threads my choice was limited, sometimes that helps to narrow down the alternatives.

And finally lace layers. This was heaven to stitch. Firstly choose a pretty piece of fabric with lace for background, then play. I had an old hanky which someone had marked with one of those laundry markers the numbers 25 in a corner. I was never going to use someone’s old hanky, probably my step-mum’s as a hanky, so I had my background. Three hours of bliss followed.

Tag 18 is pretty but very fiddly.

Teeny tiny hexies, how many can I fit onto the tag?

Stitched together and ready to go on my backing fabric.

I really quite enjoy couching- this tag is couching with a difference- the challenge to couch rolls of fabric. Harder than it sounds! We were also challenged to use a colour we don’t/haven’t used much of. For me this would be green, brown or orange. I don’t have a great deal of fabric in any of these colours, but what I do have is a pack of green threads bought many years ago- i.e. at least 20 years ago from a now defunct embroidery shop. They cost well over £4 at the time, which for a few lengths of mainly wool, I consider it a bit of a rip off, and so never used them. The time had come!

Even that has a story behind it. I bought it as part of a pack of two, having found a project at least 20 years ago to make aprons from t-towels. I made the first one and lost heart- it looked like an apron made from a t-towel. Anyway there it sat in my fabric box. Time to do something with it. I used it as the base for my tag and for one of the fabric rolls.

But quite enjoyable to stitch. What’s next I wonder?

The fabric is purple in case the colour doesn’t appear properly. I choose three yellow embroidery flosses. I love the yellows and purples of Spring time crocuses.

And start to stitch

I like the way the colours blend, but mine didn’t puff up as much as others I have seen. Should have used the cheaper wadding not off cuts of batting. Learning all the time. 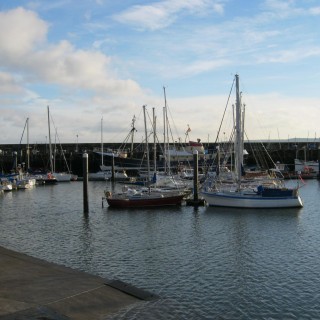